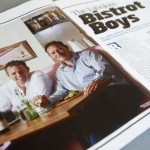 Phil Jupitus and The Big Society. Portraits for The Independent.

A few days before Christmas I joined The Independent’s Jon Brown to interview comedian Phil Jupitus. The interview was centred on Phil’s upcoming musical, Big Society! which premieres at the newly restored Leeds City Varieties later this month. Produced by the Red Ladder theatre company, the musical centres on the exploits of a variety show […]